On 10 and 11 July, Team Avgas, supported by Maxiscoot, travelled to Cheb in the Czech Republic to take part in one of the legs of the prestigious European Scooter Challenge 2021.

Romain, Antoine and Sébastien headed to the kart arena in Cheb on Thursday to set up and tune their scooters during free practice. The bad weather forced them to wait until Saturday to do the first laps.

On Saturday, the team did their first laps on a dry track during free practice. Romain is in good spirits and optimistic – his new 1965 Vespa Primavera v5a is equipped with a crankshaft, cylinder kit and exhaust from the Falc racing catalogue, as well as a Crimaz gearbox, a 30 mm carburetor and a Stage6 air filter. 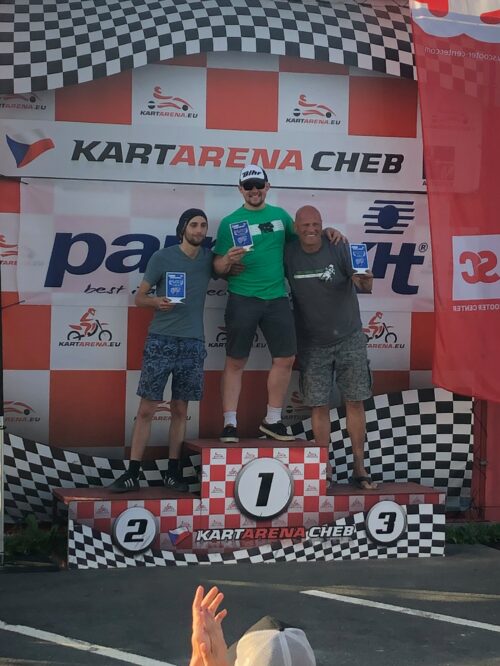 Romain is the first rider to start. The start is successful, he quickly picks up speed and holds 3rd position throughout the 1st run. Unfortunately, he has to leave the track three laps before the end due to a collision. Despite a broken exhaust and a punctured tire, he manages to finish in a respectable second place. Sébastien, on the other hand, battles with two other drivers throughout the race and finishes in fourth place.

As soon as the scooter is fixed again, Romain is on the grid for the second race. His excellent start allows him to take the lead and hold this position until the end. The second race was more difficult for Sébastien, who ends up in 6th place.

In the third and final race, Romain is in second position from the start. On the last lap, he finally finds an opening in the last corner by crossing the track. He finishes the race one tenth of a second ahead of the runner-up. Sébastien, battling with the same two riders as in the previous races, comes in fifth.

A big congratulations to all the Avgas team members who worked tirelessly all weekend to get the team on the podium.

The team is very pleased with this great weekend of competition. Congratulations to them on these great places and fingers crossed for more racing events next season. Giv’er!!!